WWII - The Leadup to War

World War II was the biggest and bloodiest war in human history, with casualties often estimated at 60-80 million (directly and indirectly). At the peak of the war, more than 50 million men and women were serving in the armed forces of the many combatants.

There were many seeds that contributed to the path to the second world war, most of which were sown during and in the aftermath of the first. WWI led to deep hatred and imperial ambitions for many countries, with Britain and France seeking to protect their empires, and Japan, Germany and Italy all seeking to create their own. Another major post-war contribution was the Treaty of Versailles and the Great Depression, which both ultimately lead to the power of Adolf Hitler in Germany.

WWII saw the dawning of new modes of warfare, with the use of tanks and aircraft, communication via radio, and the ultimate construction of the atomic bomb.

The war ended with the defeat of imperialism, and the stabilization of international order. Post-war, communism began to rise in much of Asia, whilst the United States wished to use its power to create a global influence in order to preserve its own non-communist interests. This undoubtedly led to a new era the world would have to face known as the "Cold War".

In this blog we will explore the affairs that caused the break of war around the world..

The Rise of Adolf Hitler

Adolf Hitler (see thumbnail) was an Austrian-born, German patriot who used the German tribulation and humiliation to rise to power. The Treaty of Versailles forced the German's to pay an ridiculous amount of money (equal to $33 billion USD which they only finished repaying in 2010) to Britain, France and the US, as a reparation for WWI. Not only this, but the German's were forced to demilitarize the Rhineland, cede land to multiple countries, surrender colonial territories, reduce their military size to 100,000 men and they were no longer allowed to have an air force. These things cast Germany down into a state of humiliation and vulnerability among many other things.

The German situation took another dive when Wall Street crashed on October 24 1929, causing a global economic disaster known as the Great Depression. Among the nations most affected by the depression, was Germany.

Hitler promised to repair the broken German economy and in the end bring back honour and dignity to the German nation and people. This ideology made Hitler an extremely popular figure to the German people. His Nazi political party rose to power in Germany, and began to fulfil the promises that Hitler made. The Nazis did very well in strengthening Germany, but his ultimate aim was to expand Germany and in the end take over the whole world. Another downside to the Nazis power was their popular view that some minorities, especially the Jews, were inferior people, and responsible for Germany's current situation. This view would later lead to a mass extermination known as the Holocaust (I won't go any further into that in this blog). 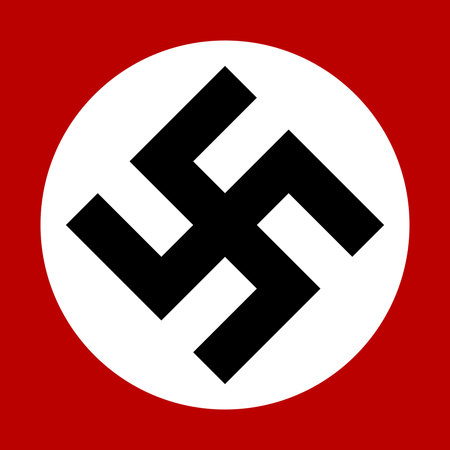 The Rise of Fascism

Benito Mussolini was an Italian socialist politician and news writer who was originally anti-war, and protested against the Italian annexation of Libya, which caused the Italo-Turkish War, and Italy's involvement in WWI. Then, after reconsidering things, he became pro-war, believing that WWI could cause the overthrow of European monarchies, and lead to a global socialist revolution. This pro-war view had him cast out of the socialist party. So Mussolini decided to lead his own party, which he called the Italian Fascist Party, and began to spread fascism around Italy. He wanted to create an Italian Empire to reunite all Italians, similar to the Roman Empire. To achieve this goal, he began plans to conquer the Mediterranean.

Italy were expecting to gain much more than they really did for helping the Allies in WWI. This made the Italians very unhappy. This along with a bad economy and bad governance made the Italians feel even worse. Mussolini chose this time to present his fascist ideals, and claimed they would bring Italy back to its former glory. Mussolini, and the National (Italian) Fascist Party, became popular; so popular in fact that he was able to make himself Prime Minister with the backing of his many supporters. Having been made PM, Mussolini established a dictatorship, with himself as the fascist dictator.

With Mussolini having established a fascist government in Italy, Hitler also began to support fascism in Germany. In 1933, Hitler was made German Chancellor, and he thought of himself as Germany's destined saviour. He then established a dictatorship, with himself as the dictator.

Not only did Italy and Germany have the same ideals, they also had the same enemies (France, the United Kingdom, and the Soviet Union mainly). They began to become strong allies, and made plans to expand their territories, along with their fascist regimes.

Spain also began to become more and more fascist, but they played no major part in the war, being pre-occupied with their Civil War, so I won't go into that.

Japan however, had similar ideals and also, like Italy, felt cheated after helping the Allies in WWI. They had already begun to use the weak state of China to their advantage, and had begun to expand their territory during the Sino-Japanese Wars (see here, here, and/or here).

So now Germany, Italy and Japan all felt hostility to the allies, and all wanted to increase their spheres of influence and empires by conquering more land. These three countries began to strengthen their alliance, later signing the Tripartite Pact in 1940. 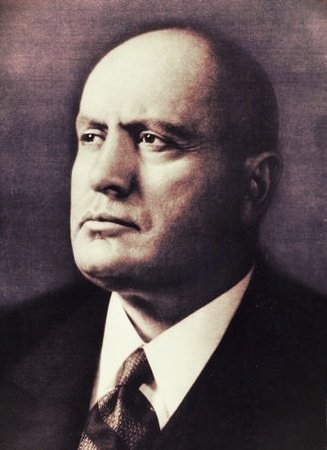 All three Axis nations were intent on pursuing their imperialistic ambitions by means of force and aggression. In 1931, Japan seized Manchuria from China, to expand and to help their economy by means of natural resources which Japan lingered in.

Italy, in 1935, invaded Abyssinia (Ethiopia), causing a huge amount of casualties. Then in 1939, they invaded and occupied Albania, so they could control the Adriatic Sea.

Germany first decided to completely violate the Treaty of Versailles, by operating their first Luftwaffe squadrons, and enforcing conscription. Then they sent troops into the de-militarized Rhineland, all without Ally resistance. Hitler's vision was to increase the population of Aryan Germans (who he thought were racially superior), and to do this, he wanted to take over the world. The allies, namely Britain and France, began to be worried about the direction things were going. They had already seen both Hitler and Mussolini support Francisco Franco in Spain, in his attempt to overthrow the democratically elected republican government. So in an attempt to stop a further war, they adopted a policy called "appeasement". This strategy saw concessions granted to Hitler and Mussolini, in the hope that they would accept this and go no further like they promised. This later proved to be relatively useless, as you would probably expect.

With the European's preoccupied with the Spanish Civil War, Japan decided to launch a full-scale invasion of northern China, beginning the Second Sino-Japanese War. There was really only one country that could stop Japan, and that was the United States. The US however, continued its policy of isolationism, meaning it chose to stay out of international affairs as much as possible. After the Marco Polo Bridge Incident, Japan continued their invasion into China, taking Peking (Beijing), Shanghai, and later Nanking (Nanjing), China's capital at the time. Japan had expected to reach Nanking much earlier, but were stalled by a fierce Chinese resistance. This irritated the Japanese troops, who when they reached the city, committed many horrendous atrocities against Chinese civilians. These atrocities would later become known as "Rape of Nanking", or the "Nanking Massacre".

Appeasement had still granted Hitler the annexation of Austria called Anschluss (or Union). This annexation was quite popular in both Germany and Austria, but opposition was still present (as seen in the famous movie, The Sound of Music). The German's also were given a part of Czechoslovakia near the border called Sudetenland.

British Prime Minister Neville Chamberlain, famously brandished Hitler's promise that Germany had no more territorial ambitions in Europe, after Czechoslovakia. He claimed to have made peace, and avoided a war, but Hitler wasn't finished in Europe like he had said. The Munich Agreement, which permitted the German annexation of Austria and Sudetenland, was signed in September 1938. However, in March the following year (1939), Germany had already broken the agreement, and began to invade the rest of Czechoslovakia, and then annexed the whole country.

Hitler planned on continuing his invasion East, by taking over Poland and connecting the German mainland with East Prussia, which were separated by the Polish Corridor. In addition he would also capture the Free City of Danzig, which was under the trust of the League of Nations. Britain and France, predicting Hitler's next move, told him that an invasion of Poland would mean war. Hitler, not wanting to be fighting on two fronts, signed an alliance with Joseph Stalin, agreeing to split Poland between them, if they both invaded it. This alliance stunned Britain and France, and Hitler possibly thought that they would pull out of war again because of it, like they had on every other occasion.

So, on September 1 1939, German troops entered Poland, beginning the invasion. Two days later, Britain and France declared war on Germany. This is generally considered as the point that WWII began. Just 21 years after the "war to end all wars" (WWI), Europe, and the world at large, was about to be torn apart again... 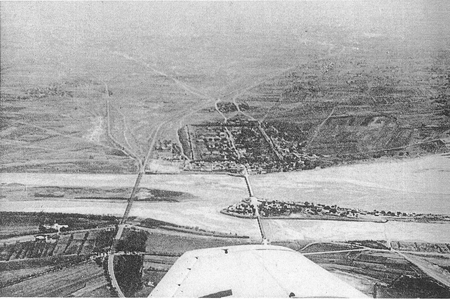 Aerial view of the Marco Polo Bridge, near Peking (Beijing). 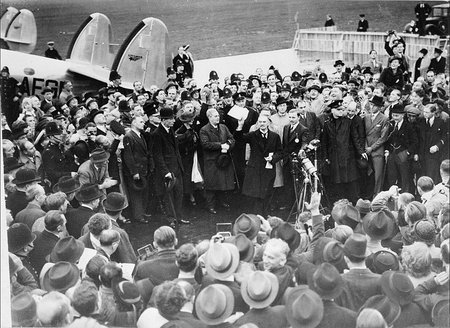 Neville Chamberlain presents the Munich Agreement, signed by Hitler, and proclaims the evasion of war with Germany, or "peace in our time"
QuizzerBros
+2
Level 63
Dec 22, 2021
Mostly the resources I used were the respective Wikipedia pages (find links above). I also used a helpful book titled World War II by authors H.P. Willmott, Robin Cross, and Charles Messenger. Lastly I used the part 1 video for WWII by Youtuber, Oversimplified. I recommend both the book, and the video/s. I hope you enjoyed this blog. I'm not sure how many more I'll do, but we'll see. Thank You!
QuizzerBros
+2
Level 63
Dec 22, 2021
Also see KamikazeKid's profile for his own spin on pre-war affairs.
BigGeographyGuy
+4
Level 64
Dec 22, 2021
Excellent blog and well explained! By any chance, is this going to be a series or is this just a one off blog?
QuizzerBros
+2
Level 63
Dec 22, 2021
Possibly. I may do more, but I'll see. And thank you for the compliment!
User Blogs
:: QuizzerBros's Blog
:: This Blog
Countries of the World Quiz
US States Quiz
Europe Map Quiz
Random Capital to Country
Countries by Borders in 90 Seconds
Fast Typing 1 to 100
Fast Typing A to Z
U.S. Presidents Quiz
Island Countries Quiz
Random Country to Capital
Countries that Start with I
NBA Teams Quiz
Asia Map Quiz
Counties of England Quiz
U.S. State Capitals Quiz
Random
Top Today
Save Your Progress