Catan is a game where you compete with 1-3 other players to get 10 victory points first.

When you get the regular version of Catan, it has 6 edge pieces that fit together. Then it contains a sticker in the box. It has an ideal beginner setup, though you can put everything( Plains, farm, hill, mountain, forest) wherever except for the desert tile. It goes in the middle. Then you put a number token on every space except the desert. Then you can change the ports with the port tiles. Take out 5 settlements( house ), 4 cities( L shape), and 15 roads(stick) of your color, as well as the building cost card of your color. Shuffle the development cards (white back with symbol), and sort all 5 resource card types(Wood 🪵, Wheat 🌾 , Sheep 🐑 , Stone 🪨, Clay🧱). 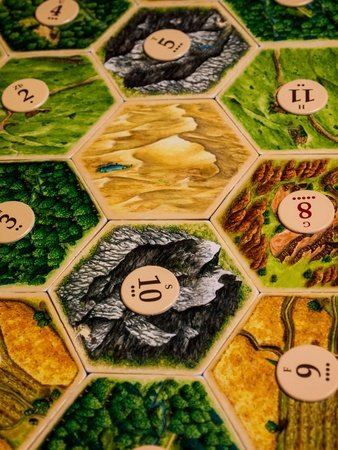 The terrain hexes in the board with numbers.

After setting up, you roll a die to see who goes first, though only one. Then they place a settlement and a road next to one another. Settlements on corners of the hexes, roads on the edge. Then it continues clockwise to the left. Once you get to the last player on the first settlement, they place another and it continues counter clockwise. Though remember the Proximity Rule! Two settlements cannot be adjacent by a space of one road to any other throughout the whole game. Then you get the resource the road connected to your house is facing. So in the image below, the blue settlement in the foreground would get 🪵, because it is next to a forest. 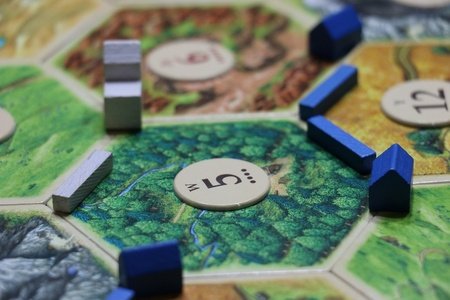 Settlements and roads in ideal positions.

Throughout gameplay you will build something. The building cost card says what you can build. You can build:

A road costs 🪵 and 🧱 and allows you to build a settlement on the end unless the Proximity Rule comes into effect.

A settlement costs 🧱🪵🐑🌾 and provides 1 victory point. It can only be built on a road of your color. The Proximity rule means you can’t build a settlement.

A City is an upgrade to a settlement and provides 2x resources for each hex and adds another victory point. It costs 🌾🌾🪨🪨🪨.

Progress cards either are Monopoly, which makes everyone give you a resource, or Road Builder, which you use to build 2 new roads as if you just built them.

Knight cards move the robber and play continues as if you rolled a 7,  except for the 8 or over limit.

The robber is the tall grey figure who starts in the desert. When you roll a 7, everyone with 8 or more resource cards has to discard 1/2 of them. If you have an odd number, it’s the lower half you discard. Then the 7-rolling player moves the robber, and if anyone has a settlement on that hex, they can steal one card from them. Then when someone rolls the number under the robber, they get no resource.

If you have a settlement/city on the number rolled, you get 1 resource per settlement and 2 resource per city on that hex. You can do trade. Maritime trade is 4:1, so you trade 4 for 1 card. Though ports have better deals. Some are 3:1, others are 2:1 for a specific resource. So if you had the 2:1 🪵 harbor, you could trade 2 🪵 for 1 🪨 or 4🪨 for 1🌾. Then you can trade with other players. If it is your turn you can trade with anyone, but they can only trade with you. After a ton of rounds, someone will win.

The sign off image is Catan, which I actually play. Here are the games to vote for:

War and Sevens are combined due to the fact they are short.

Options probably will be: