One day I showed up to my family dinner table in the early 1990s to be greeted with a new and strange dish: orange roughy. It tasted okay I guess. What I didn't know was that the orange roughy was originally known as the slimehead. The name was changed in the late 1970s to make it more palatable. And it worked. I'm pretty certain I wouldn't have eaten anything called slimehead. I'm also pretty certain that the name change was the worst thing to ever happen to the slimehead.

You see, the thing about slimehead is that people originally thought they had a lifespan of 30 years. But it turns out that they can live for up to 200 years. They don't reach even reach sexual maturity until 23–40 years of age. This led to a huge amount of overfishing, as slimehead stocks take approximately forever to regenerate. Within 20 years of the opening of commercial fisheries in New Zealand, most stocks were depleted. 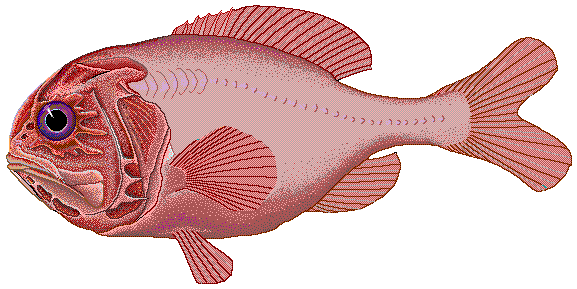 The sablefish is found in muddy sea beds in the North Pacific. It is also delicious.

But even the sweet and savory taste of a miso-glazed sablefish isn't enough to entice the finicky consumers of North America. We need something familiar. Something that we've heard of before. Not something yucky and new.

And thus the "black cod" was born. Never mind that sablefish bears no relation to actual cod. It tastes kind of like cod, I guess. It's the different, but the same. No wonder black cod is a staple of just about every Asian fusion restaurant that has ever existed.

Eww.. a fish that's made of teeth. That's gross.

Chilean sea bass? That sounds like a fish I know. Plus it's exotic. I'd have no problem paying $20/pound for something like that.

Chinese food is delicious. But there are certain things that Chinese people eat which give Westerners the heebie-jeebies. Here, are, a, few, examples. So when someone asks you if you want a Chinese gooseberry, you're maybe a little unsure of how to answer. Thus, in an effort to juice sales, the good people of New Zealand started calling it the "kiwifruit". And it worked! Since 1970, New Zealand's sales of kiwifruit have increased by over 20,000%.

Because cooking with canola oil doesn't make you a sex offender...

Yes, that is what some people used to call sea urchin.

Did you know that bluefin tuna used to be considered unappealing? That started to change in the 1960s. Today, a single bluefin tuna can sell for up to $3.1 million. Imagine that someone put a $3.1 million bounty on your head. Your life expectancy would be very short, no matter where you were hiding. And now you can understand why bluefin tuna are threatened with extinction. But there's something we can do about it. Petition for a name change! I hereby recommend that bluefin tuna be renamed to the Atlantic Snotbutt. Who's with me!

TheRealGrantma
+19
Level 57
Aug 10, 2020
When you click on a link that leads you to deer penis
ChineseChen
+2
Level 63
Aug 10, 2020
The only one I’ve eaten is thousand year old egg (it’s pretty good). I’ve heard of some other disgusting foods that Chinese people eat. Pork brains/livers/blood/stomach, bullfrog, chicken feet/head, stinky tofu, all kinds of fermented and pickled stuff, pigeon, quail, quail eggs (not bad), and other weird body parts, to name a few.
GeoPhilia
+12
Level 57
Aug 10, 2020
You forgot to mention Bat Soup
bonk
+3
Level 70
Aug 11, 2020
Thousand year old egg is okay except for the yolk (which sucks in my opinion). The weirdest thing I've eaten is probably chicken gizzard (its stomach), but I've also seen my parents having pork blood, beef intestine/intestine lining, and also chicken feet (which honestly doesn't seem that weird to me but I'm also Chinese so)
ChineseChen
+1
Level 63
Aug 12, 2020
Yeah chicken feet isn't that weird. I've seen pork blood, liver, and intestines at my local Chinese supermarket. The deli there also has fried pigeon.
joez
+5
Level 70
Aug 10, 2020
Rocky Mountain Oysters.
CringeDragon
+3
Level 73
Aug 10, 2020
Haven't tried these, despite being offered several times. And I don't plan to.
ducklingpanda1245
+2
Level 48
Aug 10, 2020
Very interesting! And yes, I'm with you on the name change!
toowise
+3
Level 74
Aug 10, 2020
Here in the UK we have "Black Pudding" but in Germany the same thing is called "Blutwurst". Its actually Blood Sausage, i.e. a sausage that is filled with blood mixed with a thickener (often oats or oatmeal" Sounds disgusting but is very tasty.
Quizmaster
+1
Level ∞
Aug 10, 2020
Your comment reminds me of this ESPN commercial.

But black pudding is delicious! I had it just about every day for breakfast on my last trip to the UK.

FlyingG
+1
Level 56
Aug 11, 2020
Personally I didnt really like it when i went there
JackintheBox
+1
Level 75
Aug 11, 2020
I ate it once for breakfast when I was holidaying in Windermere. I quite liked it though it was pretty salty.
toowise
+3
Level 74
Aug 11, 2020
There is a huge difference in quality as well, I love the stuff and even eat it uncooked. Supermarket BP is OK but for the best it has to be a local butcher's own made.
bluesdjben
+3
Level 74
Aug 11, 2020
I think sablefish actually sounds better than black cod. But I get why they changed it anyway.
Walacama
+1
Level 78
Aug 13, 2020
It does sound better. However, for me, and many people I know, I already know what Sable fish is and would never order it. Mostly because of smoked sable that I find quite disgusting. (I know others love it). I do love cod, so seeing black cod on a menu would intrigue me. Thanks to this blog, I will not be duped.
IsleAuHaulte
+1
Level 86
Dec 28, 2020
Codfish was always considered a trash fish on the coast of Maine. They were abundant compared to others, but full of worms and taste like cheap, old fish before they even start to taint.

Knowing the way marketers blatantly lie ("crab" meat, "truffles", "fleece" made of spun plastic that's never been within miles of a herd animal) I should've guessed black cod was another lie as the only black colored cod fish I've ever seen came from extremely deep water (over 800 meters) no net fisherman could go to. Down there everything is clear, black or red, even if it's identical to shallower cousins in every other way.

Me: You know, just some whore's eggs, deer penis and slimehead cooked with rapeseed oil.

DylanClarkWebb
+1
Level 63
Aug 15, 2020
In the UK we still call it rapeseed oil, but a lot of vegetable oil in supermarkets is actually rapeseed oil and is cheaper
applescrumper
+4
Level 48
Aug 19, 2020
Yeah, driving past a field of canola plants in bloom with a pair of fairly elderly English folks a while back, I was surprised (and rather amused) to hear one of them remark with no apparent irony whatsoever, "What a beautiful field of rape!" I was aware the plants were called "rape" in the UK, and I've bought "rapeseed oil" at the market more than once, but it was still a sentence that fell oddly on my American ear.
brainchild
+2
Level 71
Sep 19, 2020
I always loved that food can be named so that it becomes rare, gourmet and expensive sounding. "Tonight we are serving grilled prawns." translates to diner talk "Here's some shrimp, y'all." Other variants: Caviar or Fish Eggs. Chickpeas or Garbanzo Beans. Why eat hazelnuts when you can eat filberts?🥜
yeetdeet
+2
Level 61
Sep 28, 2020
It's true that some foods are similar, but they're not the same. Caviar, for example, is specifically the roe of a sturgeon, while fish eggs are the eggs of any fish. Prawns and shrimp are also different.
Zefyrinus
+1
Level 68
Oct 5, 2020
Also blood orange → red orange.
Ashurinjoo
+1
Level 15
Dec 16, 2020
In japan, one food that is a bit gross is ika ikizukuri which is squid chopped up while it is stil alive.
IsleAuHaulte
+1
Level 86
Dec 28, 2020
The name for urchins is just a regional fisherman's term not used very publicly I always thought. I'm really surprised you had heard of it.
Kirboi
+1
Level 56
Apr 9, 2021
"balut balut balut balut"

What a balut vendor in the Philippines would say